IFOY finalists put through their paces in Hannover

Booths for talks, screens for presentations, zones for forklift testing: This was the setting for the IFOY Test Days 2019 in hall 4 at the Hanover fairgrounds in Germany. 15 Devices and solutions nominated for the IFOY Award from a total of a dozen manufacturers had to face the audit of the international intralogistics test over several days. New developments from Cargometer, Clark, Combilift, Hubtex, Jungheinrich, Raymond, SAE, Still, Torwegge, UniCarriers, ProGlove and Trône Seating were included. 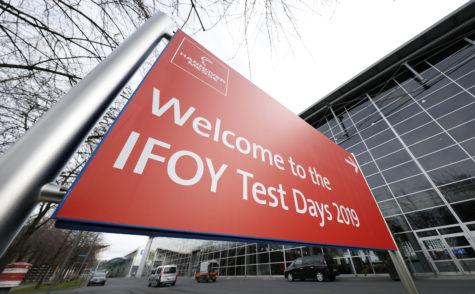 From 1 to 8 March the nominees were put through their paces by scientists, an official tester and 29 jurors. More than 120 guests from 19 nations travelled to Hannover to follow the test procedure on the premises of IFOY partner Deutsche Messe AG. Among those present were not only members of the international jury but also their consultants from industry, logistics services and science as well as the test teams of the manufacturers.

The three-part audit began with the practice-oriented IFOY Test by Dutch trade journalist Theo Egberts. He compared the nominees with the relevant competitors. The machines underwent individually tailored driving or functional tests, including the IFOY Test protocol, which comprises around 80 criteria and determines cost-effectiveness and energy efficiency, sustainability, safety and ergonomics of the nominees. In the second part of the audit the IFOY Innovation Check was carried out. Scientists from four renowned institutes and universities assessed the finalists in terms of market relevance, customer benefit, type of design and degree of innovation.

The audit was concluded by the evaluation of the finalists by the jurors and their accredited consultants. They not only received all the results of the IFOY Test and the IFOY Innovation Check for the vote. The international trade journalists were also allowed to test the nominated equipment. For example they were able to drive a counterbalanced truck from Clark Europe’s S series (S20-35). The manufacturer paid attention to ergonomics and safety. Also in the test: the TX 3 from UniCarriers Europe, in which the ProVision concept was used in the design of the chassis, truck headliners and mast, giving the driver a 360-degree view.

The jury members were also able to test the “driving”, “lifting” and “lowering” functions of the three finalists in the “Warehouse Truck” category. The ETV 216i from Jungheinrich, the world’s first reach truck with a fully integrated lithium-ion battery, took part. For the first time, Combilift attended the IFOY with the Combi-PPT, a pedestrian pallet truck with a load capacity of 8,000 kilograms. The third nominee in this category was the electric multidirectional sideloader MaxX from Hubtex, which was designed for handling long loads in narrow aisles.

The jury members were also able to vote on the nominees in the category “AGV & Intralogistics Robot”. Here the manufacturers Jungheinrich, Still and Torwegge were in the race. In the categories “Intralogistics Software” and “Special of the Year” the intralogistics providers presented their solutions to the jurors in presentations. Representatives from Raymond Corp., SAE, Cargometer, Jungheinrich and Still spoke for 15 minutes.

What people often don’t know about the IFOY Award is important for the final result: The decisive factor for the jurors in their vote is that the nominees are not compared with each other, but with their competing machines or solutions on the market.

”Smart sitting” and “smart scanning” were the orders of the day for the startups: ProGlove had its smart glove in its test kit, with which the Munich-based company intends to replace the conventional scanning pistol in the future. The Dutch startup Trône Seating demonstrated an ergonomic memory seat that can be automatically adapted to the personal sitting position by each driver with up to five motors and also provides a lot of data.

The result of the test is traditionally – apart from the jury members – not known to anyone before the award ceremony. The IFOY AWARD Night will take place in a few weeks: on April 26 at the Vienna Hofburg in Austria.