Clark recently introduced its own reach truck. The truck is characterized by its high functionality and complete standard equipment. Furthermore, the Clark SRX is easy to operate and shows good performances. Some of the features such as the new ‘safety lighting’ are really a worldwide first.

Last year, Clark already showed its new ‘own’ reach truck at a press conference. The truck showed the brand’s ambitions, but did not meet the goals that Clark Material Handling Europe had in mind. On our continent the bar is higher than in the US or Asia, so the Europeans and Koreans jointly worked out the right optimization.
Recently, the renewed SRX series was ready for official launch and testing. The series consists of a 1,400 and 1,600 kg model and reaches heights of 10,500 mm with a residual capacity of 850 kg. We tested the SRX 16 with a lifting height of 7,500 mm and were pleasantly surprised.

Clark is not a brand that targets a high degree of technical innovation and remarkable design. No nonsense functionality is at the forefront, as is evident from the first confrontation with the new SRX 16. The truck looks little frivolous, but extremely solid, practical and accessible. This is shown, for example, by the good step including handle and the extra step. The space for the shoe might have been a bit bigger, but in reality we are not short of anything. The footplate is at a practical height and the seat behind the mid-size steering wheel is alright even if the adjustment of the system is moderate and awkward. Perhaps a future folding steering column would make the step even easier.
Striking, especially the first time, is the shallow cabin depth of 500 mm. Most brands offer 70 to 100 mm more. However, the advantage is that the entire truck is a bit more compact. 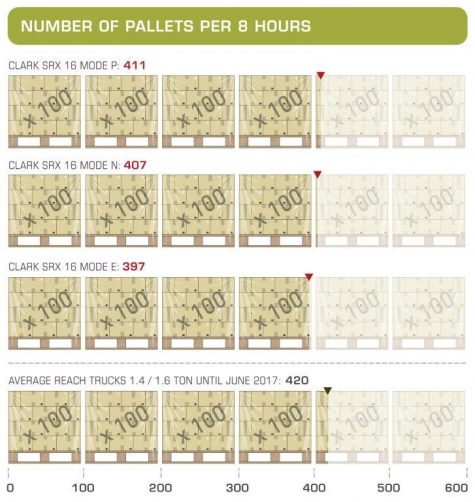 The test truck is equipped with individual mini-levers; a joystick is optionally available. The truck settings are adjustable over the colourful concern display Clark uses for other trucks as well.
The standard equipment of the SRX trucks is more complete than many competitors, claims Clark. According to the manufacturer these items together represent a value of approximately € 2,000. The basic AC-truck is equipped with maintenance-free 3-wheel suspension (electromagnetic), side shift, wheel caps, load rack and reaches a top speed of 14 km/h. Furthermore, each truck has a rolling bed for easily changing the battery sideways and the possibility to switch between 180 and 360 degree steering by the push of a button.
Optional items on the test truck include lights, programmable lift height preselection, a fork camera, automatic fork levelling and central positioning. Not often on reach trucks, but available on this SRX 16 is the stop protection for both lowering and reaching to prevent damage to the load arms when lowering or reaching in. It all works neatly and precisely.
Additionally, Clark has a prime in terms of sight and safety around the truck. The Clark Safety Light casts a striking red, slightly curved light beam on both sides of the truck. This attends other people to keep sufficient distance to the truck. Together with a red or blue spot, it brings a whole new light to vehicle safety. 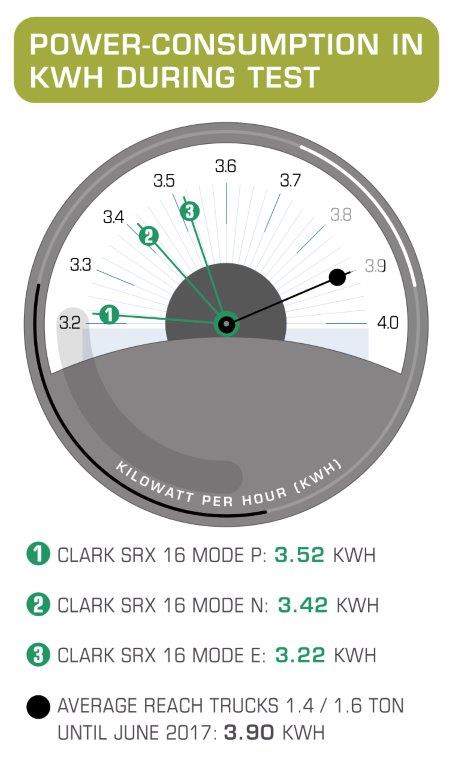 The Clark SRX 16 offers three factory settings: Power, Normal and Economy. The settings affect the unladen lifting speed, the acceleration and the driving speed. ‘Normal’ gives the truck an excellent basic speed and manageability, but also in the ‘Power’ mode the Clark truck allows easy operating. Of course, all settings in all modes can be adjusted to the customer demands by the service engineer.
While working with the reach truck the left fork and the right arm are almost always in sight of the driver. Often the other arm and fork are also visible which makes working with the truck very ‘in control’. The mast parts are neatly assembled and the chains and hoses are mounted to ensure optimum visibility for the driver. The sight through the protective roof and around the truck is also sufficient.
The measured performances of the mast are good. Especially the unloaded fork scores high speeds. Clark has taken good care of safety and comfort. The mast damping is perfect for lowering and reaching in as well as at maximum lifting height. Reaching in and out also goes very carefully.
The electric steering system is also in a positive sense. Clark has found exactly the right amount of ratification and reaction, which makes the truck extremely predictable to handle. 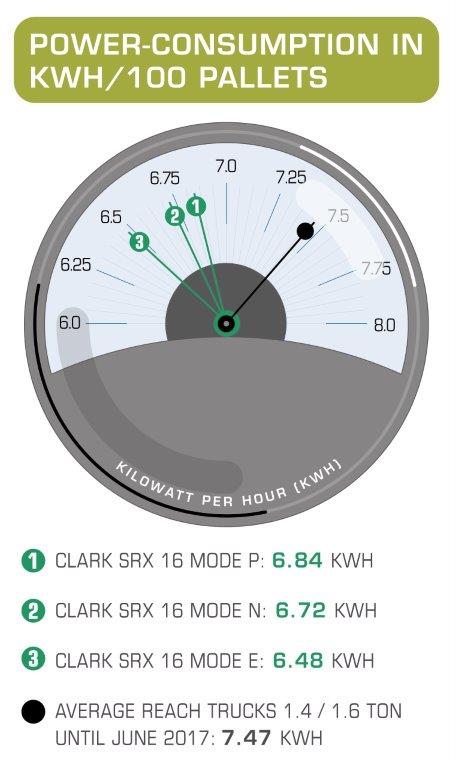 The measured driving speed in Power mode is almost 14 km/h and that is fast. Within our tests, we see that such a high speed only makes sense for longer, unobstructed straight rides over at least 75 meters. In most cases a driving speed between 11 and 12 km/h is ideal, as we notice in the ‘Normal’ mode. High productivity in general, is a result of the sum of a predictable truck, sufficient lifting speed with load, fast acceleration and high reaching speeds. The predictability of the SRX is high, acceleration and reaching however are a bit more modest. Nevertheless, the truck has a substantially equal productivity score as the average in its class. Profit point is an above average score in energy consumption. Of course, productivity can be increased, but that is always at the expense of the energy consumption.

In summary, we experience the new Clark SRX 16 as a surprisingly good debut truck in the reach truck segment of 1.4 and 1.6 ton trucks. It is functional, easy to operate and performs sufficiently to above average. The battery life is ample enough for an intensive working day. Standard the truck is richer equipped than many competitors and offers all the desired options. The testing team experiences the adjustability of the steering wheel and the modest storage possibilities as improvement points. That also goes for the cooling fan, which quite often switches on and can be heard very good. However, as well as for the size of the step and the cabin depth, these are no obstacles to work well with this new reach truck. 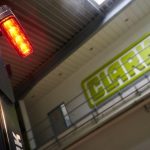 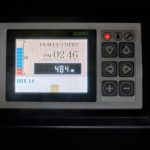 The colourful display informs the driver and gives access to the settings. The numeric keypad enables the truck to be activated (PIN) and the lifting height selector to be programmed. 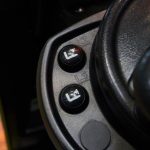 Well-known from side loaders, but hardly ever seen on reach trucks: via these buttons the driver can activate the lowering and reaching stop protection to prevent damage to the load arms. 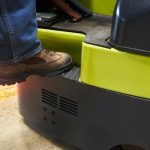 Thanks to the extra step, stepping up is not a problem. The depth of the step however is not that big, but still sufficient to be functional while stepping off. 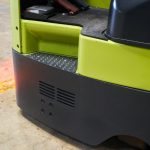 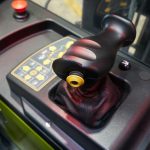 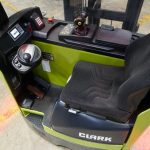 The cabin is not so deep but still fine functional. Unfortunately, storage options are limited. 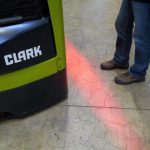 One of the striking options is the Clark Safety Light projecting a red lane on both sides of the truck to attend pedestrians and other warehouse users to a safe working distance. 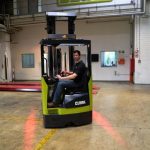 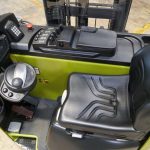 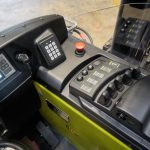 The test truck is equipped with individual mini-levers for operating the mast functions. The unit is adjustable longitudinally. A joystick is also available. 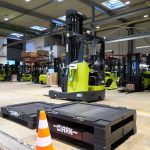 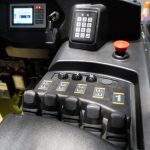 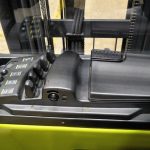 The view through the mast is good; one of the two fork points is always visible. Along the mast, the driver has a good view of the support arms. 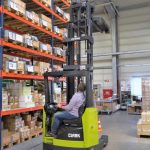 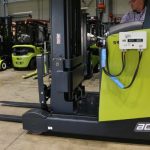 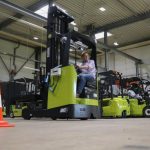 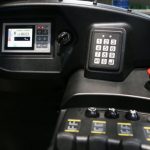 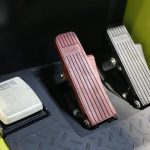 The pedal arrangement is conventional and consists of a dead-man pedal, a brake and an acceleration pedal. Thanks to the maintenance-free 3-wheel drive, the braking pedal is rarely needed. 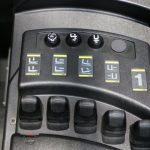