At this years’ World of Material Handling Linde officially introduced the Linde Roadster. The new forklift truck has no front pillars for better visibility and a safer operation. The tires are also new and especially designed for broad application within the Linde truck program. We compare the newcomer with the exact same base truck tested in 2014.

The E25R is part of the E20-E35 series, which also includes extra high and extra long truck models, or even a combination of the two. This allows you to choose for maximum battery capacity of 775 Ah and load center up to 600 mm per truck model. Our test truck is, like the one in 2014, a short, low version that includes a 500 Ah/80V battery and a standard mast with 4530 mm lifting height.
According to Linde, everything under the battery cover is unchanged. We however suspect that there have been some software adjustments and settings have been further optimized. All the same, above the cover a completely new truck has arised. The roof structure has been reinforced and equipped with an impressive firm armored glass. For additional visibility the mast and the fork carriage have been widened and the dashboard has been lowered. The result: 28% more visibility and a safer operation!

To enjoy the view, first you have to mount the truck. This is the moment you realize that the new construction is not without compromises. Already after the first practical tests Linde decided to provide the Roadster with a windbreak, which is especially useful and comfortable when driving outside. However, where should this windbreak be fixed if the pillars are lacking? Linde’s answer is to the brackets at the front, but these were intended as a handle while mounting and dismounting the truck. In addition to the glass screen an extra handle was needed, as well as some extra work lights and a brace to protect them. Linde wouldn’t be Linde if all this was not very robust and sturdy. Because of this, the handle is however uncomfortably low and not as practical to use as it is on other Linde models.
The baseplate with the two pedal system is spacious enough. Sitting on the Grammer seat seems slightly lower than in the previous test. Measurements confirm that it is in fact 2 centimetres lower. Perhaps it is exemplary, but the fact remains that a slightly higher seat is more pleasant and could be arranged with various seat options. The armrest with Linde Load Control is good as always. Too bad that the storage space underneath the armrest is poorly accessible. 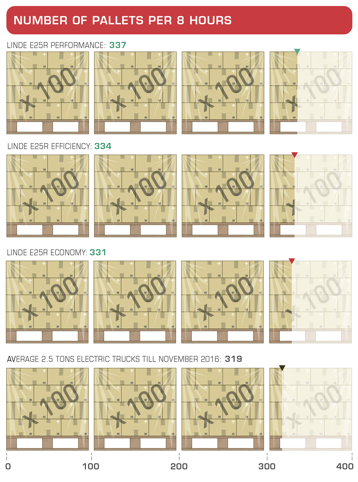 Sitting on the new Roadster the gigantic view to the front as well as along the mast immediately is striking. Looking upwards, the sight on a forklift has never before been this good. Almost the entire roof is made out of armored glass, which gives the driver great visibility on the load and the working environment when working at heights.
Linde emphasizes that the safety glass can withstand fall incidents that every conventional forklift roof should stand. It is of course essential to keep the glass clean. That’s why a wiper has been fitted, however this should not cause scratches.
The good visibility makes it easier to drive the E25R in crowded and confined environments, like between racks and inside containers. One just feels slightly more confident. Turning in front of a location, as well as making the turning point during the test, we experience as slightly more simple because there’s less disruption in the picture. The first, intuitive conclusion is that it is also more easy to maintain a constant speed. 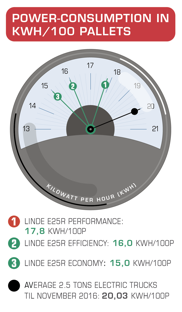 Furthermore we experience the new CS (Closed Shoulder) Continental tires as an improvement. The tires are very stable and result in an very predictable truck handling, even in curves. The tires are available for various Linde truck models and definitely help maintaining constant speeds. After all, driving fast never entails higher performance, as we can conclude from over 30 years of testing experience. Reaching and maintaining a good average speed; that is the trick.
With the Roadster Linde mastered that trick better than ever before. Compared to the test results of 2014 we achieve higher productivity in all three driving modes (Performance, Efficiency and Economy). A good achievement, considering the individual scores for lifting and driving – both with and without load – are slightly lower compared to two years ago. We suspect that Linde has optimized, or otherwise adjusted, the settings. What matters is the result of the sum total during the energy consumption and performance measurement. And those are clearly improved. 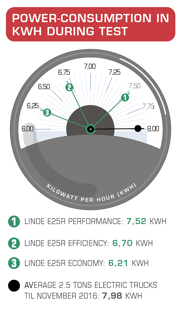 The sheer kWh-consumption during this test is substantially similar to the Linde E25 tested in 2014, but we move more pallets than two years ago. A fairer comparison is the energy consumption converted to 100 moved pallets, which is lower and well below the average in this class. In our view, the best setting is the Efficiency mode because it feels good and provides excellent scores. Selecting the Performance mode brings hardly any additional productivity and only costs energy. The Economy mode might feel less energetic, but that turns out to be very deceptive. The measured productivity is only 1.7% beneath the measurement in Performance mode. However, the power consumption at 100 moved pallets is 15.7% lower.

In short: in our tests the Linde E25R provides for increased productivity and more pleasant working, thanks to its improved visibility and better tires. Energy consumption per moved pallet drops. We experience the Roadster as an enrichment in the offer. And that goes for the Linde Safety Pilot as well. However, we do notice that the truck sometimes ‘groans’ above our when driving bumpy roads. Given the forces on the roof that is no surprise.
We think less of the accessibility of the storage compartment below the armrest and the lack of a handle on the rear roof pillar (for driving in reverse). The handle for (dis)mounting the Roadster is fixed too low. As a result of the mounted windshield the attachment of other devices, like a clipboard, seems a bit clumsy and not very chic. It is however logical that the Roadster concept has its compromises. After all the truck is based on an existing model which has been upgraded with a windshield for additional comfort during outdoor use. The fact that the production line for the E25R has been fully occupied from the start, proves that the market can live with these compromises. 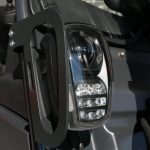 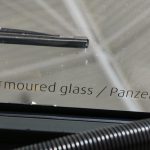 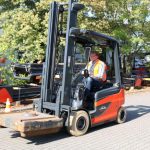 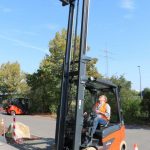 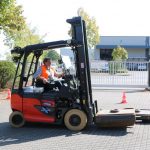 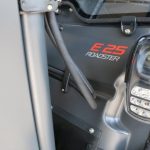 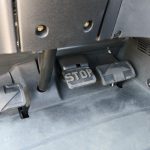 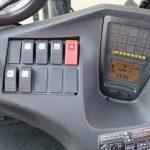 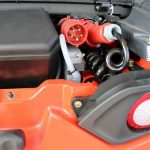 Our test truck is equipped with a built-in charger and ventilation. The battery cover does not need to be opened during the charging process. 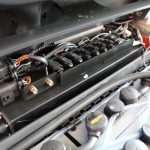 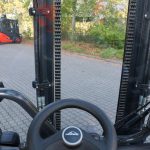 Visibility through the mast has been increased by 70 mm. The interior is in accordance with the Linde approach, neatly finished. 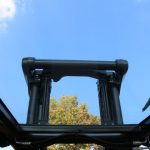 Looking upwards, the sight on a forklift has never before been this good. It is of course essential to keep the armored glass clean. 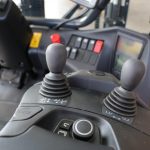 The various functions of the Linde Safety Pilot are controlled by the JogShuttle and the two associated function keys. 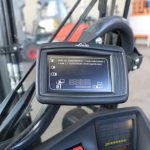 The optional Linde Safety Pilot actively monitors a safe use of the Linde E25R. 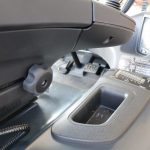 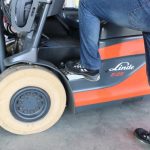 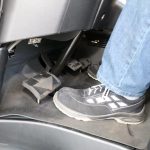 The baseplate with the two pedal system is spacious enough. 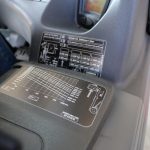 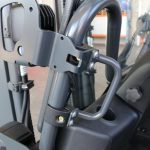 The handle is mounted too low for comfortable use. The combined function as a lamp mount and guardrail seems a clumsy compromise. 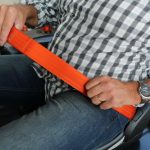 An orange coloured seat belt is optional and comes with a contact switch included. When te belt is unengaged, or engaged in the wrong sequence, the truck does not drive faster than 2 km/h. 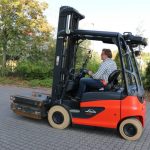