With the new trucks from the Staxio series, BT is recalibrating the standard within the stacker range. The trucks are silent, smooth, fast, productive and incredibly efficient. Add in the benefits of lithium-ion technology and you will never need to exchange batteries again. Competitors have their work cut out.

The plant in Sweden did not produce a single truck, but developed an entire new range in both pedestrian (SWE) and ride-along versions (SPE). The series has lifting capacity of up to 2 tons and has undergone numerous improvements. According to the product specialists, the new trucks are stronger, faster, more economical, more ergonomic and more convenient to use than the previous model – reasons enough for an intensive test: in this case, of the BT Staxio SPE 140L with Li-ion battery and a corresponding charger.

Like the models from the pallet truck series, the stackers have been also almost completely re-designed. We find a truck with a firmer chassis, beautiful plating, even more storage trays, practical safety guards and hence an attractive total package. Everything is carefully designed with an eye for detail and so tightly assembled that it is hard to find any rattle, even when driving over uneven floors. BT has retained what was good about the former model and that increases the recognizability and ease of use. The tiller head of this new Staxio is identical to the control unit of the preceding stackers and pallet trucks. Anyone who is familiar with a recent BT can also operate this Staxio SPE immediately.

There is a strong sense that this is a Staxio and this is especially true for the familiar tiller head. When working, however, you get a whole new experience. The truck is incredibly quiet and it even rolls smoothly over the somewhat uneven floor of the test track. It is also noticeable that the visibility is enhanced through the mast sections and over the battery compartment. The fork tips are well within the safe viewing area.

Thanks to the newly designed mast, the Staxio has a higher residual lifting capacity than before. Our test truck lifts up to 3,700 mm. An even higher mast is also available, and lifts up to 6,000 mm. This is a top score in this truck segment. The lifting speeds with load have also been slightly increased and are just above average in this class. The same goes for the driving speeds. Both with and without load, the Staxio scores above average.

Within the new Staxio series BT puts safety first. That includes the newly designed side protection, which can be operated with one hand. The solid construction of the folding platform prevents the operator from falling off this platform in sharp bends. According to the European standard; when lifting higher than 1.80 metres, the mechanism needs to be folded up if the mast does not have a load backrest extension. In that case, it is important to have a safe escape in all directions, when goods accidently fall down. Therefore the mast of our test truck automatically stops at a lifting height of 1.80 metres. Lifting higher is only possible if you first fold the guard rail down, but this can easily be done with one hand. You can even do it during lifting, so you will be working without interruption.

We find another safety feature in the support legs. For better stability, they must be lowered at lifting heights over 1.80 metres. Luckily the truck does this automatically, so the driver cannot forget to do so, and also in a very controlled manner.

During the performance measurement it shows that the traction of the Staxio is much better than the previous model. The traction always remains optimal with or without a load. The headroom has been increased on the standing platform and the height of the tiller head is adjustable in three fixed positions. The electric power steering makes manoeuvring easy. The AC driving motor responds very well to all commands given by the butterfly switches on the tiller head and this makes a very predictable deployment possible. This aspect is almost always the most important factor for gaining high productivity. For the Staxio we measured the highest productivity score ever. Even in the eco-mode, performance turns out to be significantly above the average in this class.

This can be done during a coffee or lunch break. This partial charging is often enough to work until the next short break or shift. This kind of partial charging can be done unlimitedly, with no harm done to the lifetime of the battery. Therefore there is no need for replacement batteries. Furthermore, you don’t need an expensive central battery charging area at all. And last but not least: all of the Li-ion batteries are completely maintenance free.

With the new BT Staxio series Toyota Material Handling offers a complete range of competitive equipment to the market. Competitors beware! The manufacturer delivers on all its promises of quality improvement. The new Staxio is quieter, smoother, more powerful, ergonomic, efficient and productive than the previous models. The use of the existing and excellent tiller head makes an easy transition possible for every BT truck driver. In an earlier test we already mentioned that the Levio P series was a great leap forward; the Staxio takes things one step further. 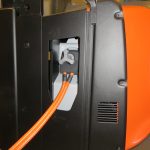 Charging is very easy thanks to the swivel connector on the side of the battery. 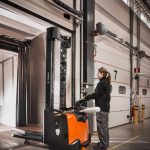 The Staxio SPE 140L sets the standard when it comes to handling and performs incredibly well in the test. 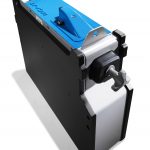 The completely maintenance-free lithium-ion battery has a capacity of 24V/150Ah and can be charged in between times. 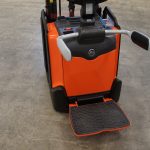 The operator platform is enlarged and has a better suspension than before; The side protection bar is easy to operate with one hand. 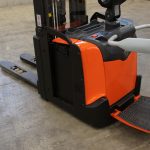 The tiller head is adjustable in three heights as required, so operators can work ergonomically whether they are small or tall.