For the most recent expansion of its internal transport fleet at its production site in Barendrecht, the Netherlands, The Greenery has opted for Aker Wade fast chargers. The chargers came out on top after an intensive selection process. For Aker Wade Europe (AWE), these are the first chargers in the Netherlands and a new milestone in Europe. 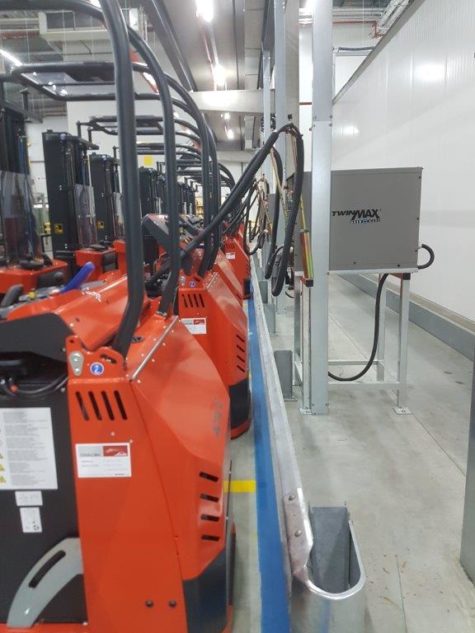 The experience of the customers proves that the lead-acid batteries are not damaged by this fast charging, emphasizes AWE. In many cases, the controlled charging process, according to the agent, even extends the service life.

Thanks to the SBO concept, costly investments in multiple batteries per truck, or in dedicated battery changing stations, can be avoided. The batteries are recharged during breaks and shift changes, which saves a great deal of time and money. There are now around 500 quick chargers installed in Europe.

The Greenery’s choice was preceded by an extensive selection process, including a reference visit to a foreign user of fast chargers. The options for a battery changing system, lithium-ion batteries and the use of additional trucks were also examined during this process.

The fast chargers were by far the most favourable for The Greenery, which operates 2-3 shifts 6.5 days a week, according to AWE. Thanks to the fast chargers, time is saved on changing batteries several times a day. Costs are also saved on the purchase of replacement batteries or the installation of a special battery changing station.

For AWE, the delivery of the fast chargers is a new milestone in Europe. The chargers in Barendrecht are the first to be supplied by the producer in the Netherlands. Both AWE and The Greenery look forward with confidence to a successful collaboration. Both parties expect more Dutch companies with a continuous operation to see the benefits of fast charging and the SBO concept.