On the first day of the LogiMAT 2018 trade fair in Stuttgart, Jungheinrich will introduce its brand new flagship from the reach truck series: the ETV 216i. The truck is completely redesigned around Jungheinrichs own lithium-ion battery and sets a new standard for space, visibility and performance. Andersom Testing did the testing, Logistics Inside Europe has the publication first. 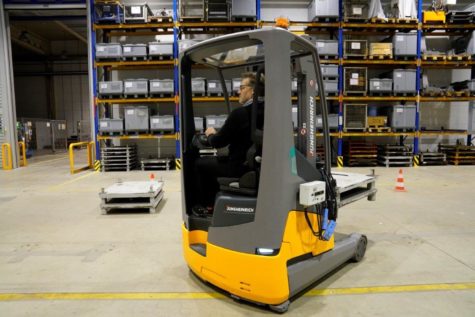 Jungheinrichs ETV reach truck series has been at the top of the performance lists for many years in terms of high productivity and low energy consumption. The ETV 214 is a record holder and the benchmark for many competitors, but the performance was never exceeded. You even think: could it be beaten to begin with?  The answer is: yes and is given by Jungheinrich with the brand new ETV 216i.

Jungheinrich redesigned the ETV to meet its own high standard. Heart of the system is the lithium-ion battery that Jungheinrich himself assembles. This technique is less dominant than a conventional lead-acid battery in terms of battery shape and that advantage is fully exploited by the manufacturer. The new energy source is not a rectangular block, but has an L-shape. The upper part of the L is underneath the chair, the lower side is below the footplate. The entire battery has also become more compact, which has a knock-on effect on many aspects of the truck.

To maximize the benefits of the new lithium-ion battery, Jungheinrich has slightly increased the height of the footplate. This in turn provided space for a real step which gives a practical way to get on and off, a feature that the ETV trucks have so far lacked. The step is clearly visible, has a clever rounded shape and is sufficiently deep. The two handles on the roof pillars make it safe to enter and exit the truck thanks to the three-point arrangement of 2 hands and 1 foot. 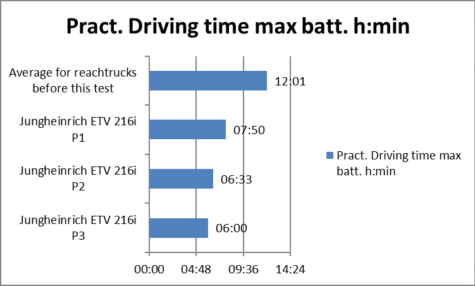 Because the battery is compactly concealed underneath the seat and footplate and is no longer positioned between the driver and mast, Jungheinrich gains a lot of space. This benefits the entire cabin, which is larger than ever before. As a driver, you will not only experience this advantage in terms of the extra foot space, but especially on the seat. Instead of a narrow reach truck seat, you’ll be seated on the ETV 216i on a full-size seat from a regular forklift truck, including a fully adjustable armrest. It moves along with the chair and therefore offers the best continuous support.

There is noticeably more room on ETV 216i and that is not the only advantage. Due to the discarded battery, the cabin on the mast side could remain low. Especially on the left side, when looking in the fork direction. This gives you, as a driver, an excellent view of the wheel support arm and the working environment. It certainly offers more possibilities to prevent collision damage to uprights of the racking system.
Jungheinrich has attached the display to the stepless adjustable steering column in order to optimise the visibility. As a result, the truck breathes an unprecedented all-round view. 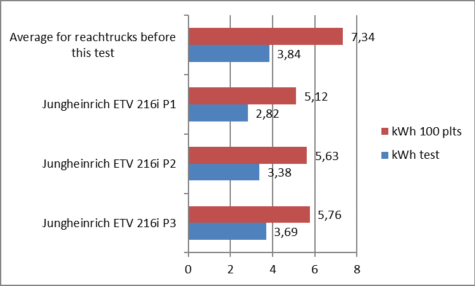 The ETV’s electric steering system has been one of the most predictable in the market for many years, and this has also remained the case on ETV 216i. The truck can be run very solidly and does not get into trouble in fast bends. What’s more, the youngest reach truck has even higher stability thanks to the extra front weight it has. This weight compensates for the lower battery weight of the lithium-ion battery and gives the truck a very low centre of gravity. This has increased the residual lifting capacity to 1,000 kg at 10,700 mm and the full 1.600 kg at 9.000 mm lift height.

The mast on the new ETV 216i will be reproduced unchanged from the existing models. Like the 5.600 mm version on the test truck. A new feature is the significantly higher lifting speed with and without load of 65 and 86 cm/second respectively, thanks to the higher output of the pump. Together with the increased acceleration and travel speed, the ETV 216i responds very directly to all commands. This advantage is largely due to the lithium-ion battery, which not only has a higher Voltage, but also makes the energy available very quickly. The disadvantage of the high lifting speed with load is the light degree of mast swing that occurs when you stop lifting abruptly. 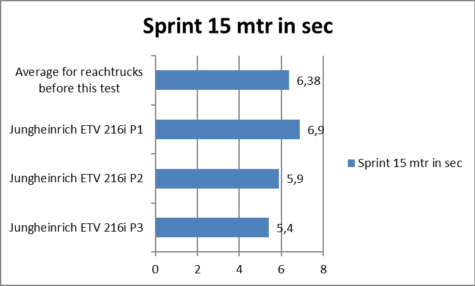 The new battery technology makes it possible to actually reuse almost all the energy recovered during braking. As a result, the operating time is noticeably longer. The readings show that the new reach truck in P3 (maximum driving mode) has a practical operating time of 6 hours and on the economic position P1 7:50 hours, mode P2 is in between. Of course, the truck can be precisely tailored to its working environment, so that maximum efficiency can be determined per deployment. However, thanks to the lithium-ion battery and highly accessible battery connection, intermediate charging is possible without any problems. A quarter of an hour during the coffee break or half an hour at lunch, the truck easily gets a full triple shift effort with playful ease. The measurements also show that the performance is slightly higher and the consumption slightly lower. The question is whether it should go so fast. A more moderate setting will in any case increase the amount of energy consumed and the operating time. Incidentally, a full charge of an almost empty battery takes only  80 minutes.

An extensive inventory of driver requirements showed that there is a great need for storage space on the reach truck. The new reach truck therefore has all kinds of storage compartments and containers. The pen holder next to the display is very handy and unique. Together with (optional) matters such as the Panorama roof and various assistance systems, they make working on the new ETV 216i extra enjoyable, easy and efficient. 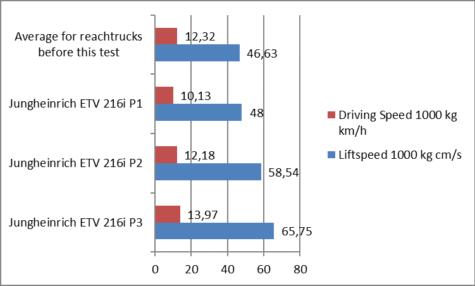 As points for improvement, the test team noticed that the inreach speed of the mast may be a bit smoother and faster when coming into the reach damping. Just two days before publishing this article Jungheinrich states that this problem has been solved. A final mast damping at the maximum lift height would be the icing on the cake, although the manufacturer states that in daily use, no or very little is raised to the maximum stop. However, it is available as an option.

The conclusion remains that Jungheinrich, with the brand new ETV 216i with lithium-ion battery, sets the benchmark again in this segment. The new truck adds an unprecedented amount of visibility and workspace and eliminates minus points such as the lack of a step on- step off from the previous series. The truck looks very modern and attractive with its DayLED driving lights and closed wheel covers. These are standard, as well as 3-wheel brakes and screwed reach channels for easy long-term maintenance. 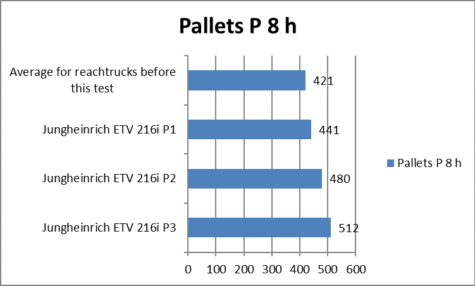 For those who are afraid of the built-in battery: it can be slid out of the truck in no time if there is a need for it. This will only be in the unlikely event of unexpected malfunctions, because the battery does not need any maintenance at all. The new Jungheinrich chargers, which also charge conventional batteries, can be used anywhere where is a proper power supply available. With this truck and technology, the German manufacturer is taking a serious step towards a completely different view of internal transport, energy supply and truck construction. Who will follow? 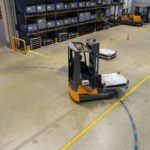 (photo 1 or 28) With the ETV 216i, Jungheinrich introduces a completely new concept for reach truck; thanks to the lithium-ion battery, the truck offers better visibility, more cab space and higher performance. 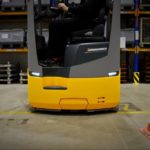 According to the current house style, the ETV 216i is also equipped with the characteristic DayLED driving lights for extra recognition. 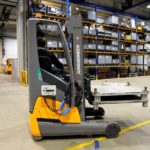 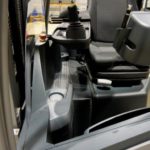 The truck is equipped with stowage compartments, cup holders and paper trays in various places. 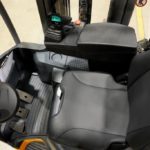 No lean reach truck seat, but a full-size seat as on a regular forklift truck, including adjustable armrest and suspension. 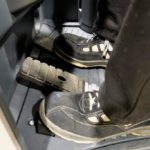 The ETV 216i offers the driver a lot of foot and movement space. 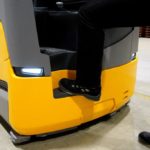 Due to the raised footplate, there is now also ample room for a generous entrance and exit on the ETV series. 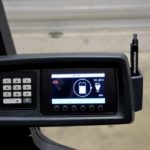 The display is now part of the stepless adjustable steering column, causing the dashboard to disappear and increase visibility around it. 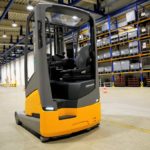 The L-shaped battery is located under the chair and footplate. In order to make this possible, the floor plate is slightly raised and the space gained is entirely for the benefit of the cabin.

The battery plug for charging is simply inserted into a convenient slot on the outside.