Video: The Winners of the IFOY AWARD 2019

Cargometer, Jungheinrich, ProGlove, The Raymond Corporation, Still and UniCarriers Europe win IFOY AWARDS in six categories at the glamorous IFOY AWARD Night with more than 600 guests in the Vienna Hofburg.

After months of selection and testing the winners of the International Intralogistics and Forklift Truck of the Year Award (IFOY AWARD) were announced on April 26 in the Vienna Hofburg (Austria). Representatives of the intralogistics providers Cargometer, Jungheinrich, ProGlove, The Raymond Corporation, Still and UniCarriers Europe received a trophy in front of more than 600 invited guests from business, politics, science and the media. The 29 jurors had nominated 15 solutions and devices in six categories for the seventh round of the worldwide intralogistics competition and voted on the winners after a three-part audit. However, the result remained secret until the IFOY AWARD Night.

Traditionally, the cheers of the winners were huge when the six laudators revealed the well-kept secret about the winners in the Great Festival Hall of the Vienna Hofburg. “In the start-up category, which was offered for the first time, as well as in the five other categories, the decision was hard again. The three-part audit during the IFOY TEST DAYS showed that some of the nominees were way ahead of their competitors on the market in terms of degree of innovation and customer benefit,” emphasized Anita Würmser, Managing Chairwoman of the IFOY jury. 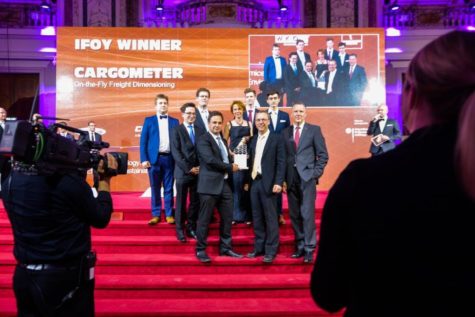 The results in detail: In the category Intralogistics Software, a Viennese company won the trophy, much to the delight of the local guests. Cargometer was awarded for its On-the-fly Freight Dimensioning. Under the English name, the Austrians launched a tool for freight dimensioning on moving forklifts. The 3D object measurement is carried out using cameras installed on the hall doors. The software offers even well-organised companies the opportunity to increase their earnings by correctly calculating the freight rates. 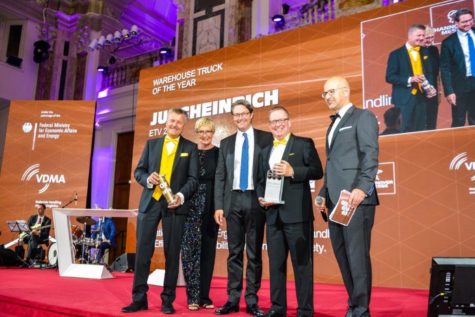 German manufacturer Jungheinrich has won a award for the most innovative truck in the Warehouse Truck category. The Hamburg based company received a trophy for its reach truck ETV 216i. The warehouse truck is the world’s first reach truck with a fully integrated lithium-ion battery and marks the beginning of a new generation of reach trucks. It convinced the jury not only with its performance, but also with its design. Because the conventional lead-acid battery was replaced by a smaller lithium-ion battery, completely new design possibilities arose for the developers. 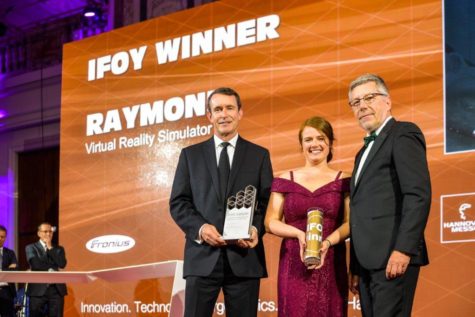 The US forklift truck specialist The Raymond Corporation was nominated for the IFOY final for the first time. The Raymond Virtual Reality Simulator was the first trophy in the Special of the Year category for the Toyota subsidiary. With the help of virtual reality glasses, forklift drivers can be trained and tested on a real Raymond truck. The solution not only provided a realistic view of the working environment, but also generated data for individual trainings of the forklift drivers. 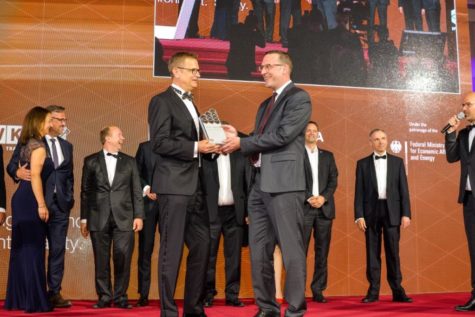 In the category AGV & Intralogistics Robot the company Still got an IFOY AWARD. The Hamburg-based solution provider was awarded for its LiftRunner tugger train with the LTX 50 tugger and automatic loading and unloading. In particular, the idea of combining automated driving and automated load transfer was rewarded. The cost-effective and easily scalable solution was simply implemented, but offers the user great benefits, for example in the supply of the production line. 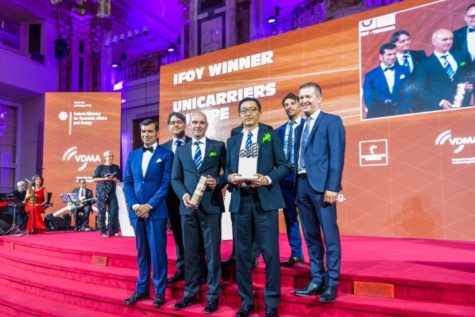 The industrial truck manufacturer UniCarriers Europe was awarded for the most innovative counter balanced truck in the Counter Balanced Truck category. The manufacturer entered the IFOY with the TX 3 3-wheel with a load capacity of 1.6 tons. The vehicle from the new TX 3 series scores with its low energy consumption, excellent all-round visibility, comfortable all-electric steering and numerous ergonomic improvements. The most important innovation: a free-swinging, ergonomic armrest, available with either a mini steering wheel familiar from the reach truck segment or a normal steering wheel. 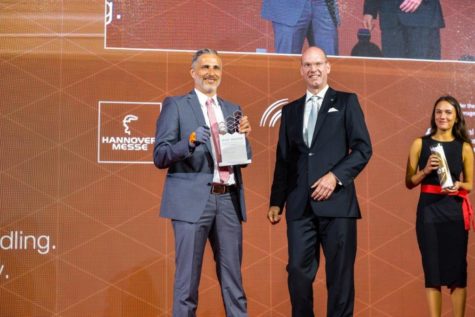 The IFOY AWARD in the category Startup of the Year was won by a Munich-based manufacturer: ProGlove (Workaround). The young company was awarded for its intelligent glove of the same name for scanning barcodes and 2D codes. It convinced with the development of a powerful scanner of the size of a matchbox, which can be clicked easily on a glove. This means that the operator always has both hands free for work.

The IFOY AWARD has established itself as an indicator of economic efficiency and innovation. Due to its specialised expertise it is regarded as the most important innovation award in intralogistics. The decision is based on the IFOY Audit. The devices and solutions are subjected to individually tailored driving or function tests, including the IFOY Test protocol comprising around 80 criteria and the scientific IFOY Innovation Check. In addition, jurors and their advisory teams from the economy assess the finalists personally before voting. Above all, it is crucial that the nominees are compared not with each other, yet with their competing devices on the market.

The IFOY Award, which is sponsored by the German Federal Ministry of Economics and Energy, is presented by the Association for Materials Handling and Intralogistics within the VDMA. IFOY partner is the Hannover Fair. Pallet partner of the IFOY Award is Chep, world market leader in the pooling of pallets and containers. The technology partner is battery charging specialist Fronius.

Press releases of all winners can be found in the press section at http://www.ifoy.org

IFOY Test reports and Innovation Checks of all finalists are available for free use at: https://www.ifoy.org/en/ifoy-2019-en/nominations-2019