With the BT Levio LWE 130 electric pallet truck Toyota Material Handling launches a powerful successor to the same model that was also known as the BT Minimover. The compact electric pallet truck has been equipped with AC technology and controllable electronics. To check the increased productivity and efficiency, promised by Toyota, we subjected the newcomer to our critical test.

In our test set-up we compare the new BT Levio with its predecessor, which has the same amount of running hours on the clock. The LWE 130 is designed as a more compact and lighter version of the existing industrial electrical pallet trucks such as the BT LWE 140. Thanks to te maintenance free battery with built-in charger, compact dimensions and carefree character the new truck provides a serious alternative to the hand pallet truck for a large group of users. 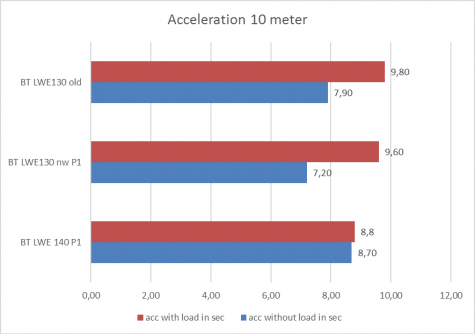 With the new model of the LWE 130 Toyota Material Handling has replaced the DC technology by AC technology. Furthermore the tiller is now equipped with a PIN keypad, making the key ignition superfluous . Different settings can be chosen by using the PIN keypad. Our test truck offers three modes: P1 is standard, P2 extra careful and P3 extra powerful. The previous LWE 130 model offers just one, fixed setting. Besides the new tiller and AC technology, the new LWE 130 has a slightly altered hood with storage options. Apart from the innovations, the truck is almost identical to its predecessor.

The test set-up comprises the moving of 4 loads, weighing 200 kg (1x), 500 kg (2x) and 1,000 kg (1x) over a Z-shaped path with a total driving distance of 30 meters. Individual performances, like acceleration over 10 meters with and without load and speed with and without load, are also measured. On the new model of the LWE130, we tested all available driving programs. To compare the performance with the bigger brother LWE 140, we drive this truck on the same test track. 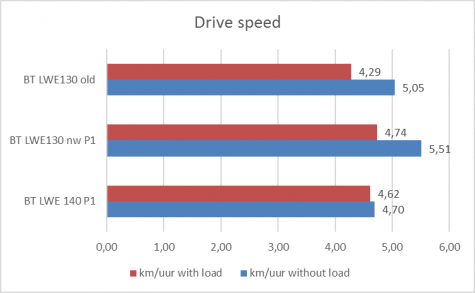 It is striking that the new LWE 130 surpasses the performances of predecessor model when it comes to acceleration and speed in P1- and P3-mode. Both with and without load, the newcomer feels stronger and more manageable. For the unloaded truck P3 is actually just a little too fast to walk comfortably. Furthermore, the accuracy in fine positioning is moderate.

In terms of productivity the 2017 version moves up to 2.4% more pallets than its predecessor. Bigger differences can be seen in the energy consumption of the new model. Converted to 100 moved pallets, the new truck – in P1 – is as much as 30% more efficient than the previous model. In P2-mode the difference rises up to 50%. Even in the most powerful mode (P3) the gain is still considerable: 16.6%. As a result of the more efficient energy consumption the operating time increases with comparable values.

For the comparison, all trucks are used on the loading dock to move two loads (500 and 1,000 kg) in and out a lorry. The loading bed of the truck is clearly higher than the floor level in the warehouse. This difference we bridge by using the dock leveler.
The LWE 130 with AC-motor is noticeably stronger and better able to safely move the loads in and out of the truck. The roll-back on the slope is minimal and the truck stops almost immediately when we release the butterfly switch. Restarting, both up and down, proceeds very controlled. The previous LWE 130 with DC-motor shows less control and has some degree of roll-back (about 10-15 cm). The truck also ‘bucks’ a little when braking. 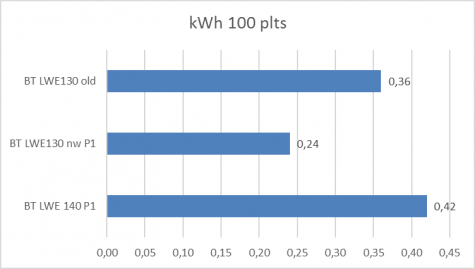 Besides de LWE 130 Toyota Material Handling offers the larger LWE 140 series. The question remains: when to use which? The compact LWE130 is ideal for deployment in the lorry. Benefits of the LWE 140 are mainly the larger battery capacity and the sound construction, which is clearly focused on a rougher and industrial operation with a more intense usage. With or without load, the LWE 140 always shows very constant performances. Moreover, heavier capabilities are available, as the range runs up to 2,500 kg lifting capacity. However, when we focus purely at performance, the compact LWE 130 scores surprising results, with higher productivity and lower energy consumption. The LWE 130 owes these performances mainly to its greater agility and lower weight.

In general, the LWE 130 scores well. It is compact, light, easy and carefree to use, especially when deployment is not very intense. Compared to its predecessor, the truck is stronger, better dosing and more energy efficient. The battery is maintenance-free and the built-in charger can be used at every 230V socket. Charging on board of a lorry is also possible. All this makes the LWE 130 a serious and economical alternative to conventional electric pallet trucks and definitely an ergonomic improvement compared to the hand pallet truck. 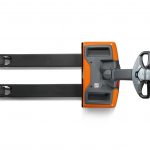 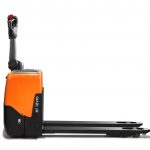 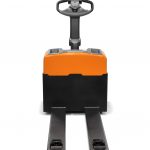 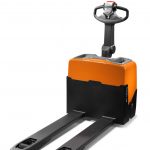 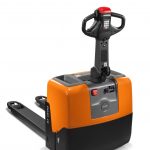 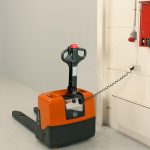 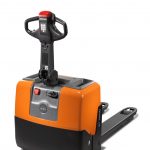 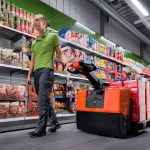 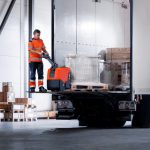 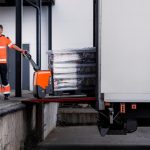 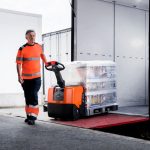 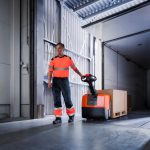